Heritage sites are scattered across the city. Proud of its status as the ancient capital, Winchester is packed full of architectural treasures and antiquities.

Here are some of the Win Guide’s favourite places to visit:

St Lawrence in the Square
The Square, Winchester SO23 9EX

Read some of our Win Guide features:

Heritage Focus: The Theatre Royal at 40

An Undergraduate explores the historic impact of a community.

We met Sam Jenkins at the celebration of 40 years since the Theatre Royal was saved. Threatened with demolition in the 1970s an action group was formed comprising of six dedicated Winchester residents who wanted to save the building for use as a permanent theatre which Winchester lacked at that time. A charitable trust was formed and subsequently purchased the building in 1977. Theatre Royal Winchester was then opened the following year on 1 November 1978 by the esteemed actor/playwright Robert Morley. Sam has been researching the theatre as part of his studies at the University of Winchester and has kindly agreed to share his experiences and findings with us. Read more

The University of Winchester’s Faculty of Arts has teamed up with St James Tavern at the bottom of Winchester’s Romsey Road to launch Tavern Talks, a new series of public conversations aimed at bringing people together to engage in lively discussions about the creative arts and contemporary discourse in the contexts of cultural history and modern politics and society. Professor Alec Charles, the University of Winchester’s Dean of Arts, tells the Winchester Guide what’s in store for the first programme of Tavern Talks, starting Thursday 25th October 2018. Read more 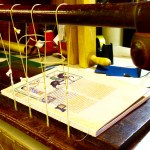 Posted 5 August 2016: Every September, an army of dedicated volunteers get together to champion local treasures through Heritage Open Days. Between 8 – 11 September, some 40,000 people across England have organised 5,000 free events to celebrate our fantastic history, architecture and culture. Read more

Touring her current talk on murder, Lucy Worsley – author, TV presenter and Chief Curator of Historic Royal Palaces – visits the Theatre Royal, Winchester with a grizzly package of scintillating information that helps transport startling notions from the past into our own time.  Asked how she feels about such macabre subject matter, and what we might learn from it, Lucy explains that the 19th century saw a distinct rise in the fear of murder. Read more

The Curse of the Butter Cross and other spooky tales

Rebecca JS Nice is your guide on a shivery stroll round Winchester – if you dare!

Have you been struck by ‘The Curse of the Butter Cross’?

It may be best to ask this of anyone who’s ever sat upon the cold, raked steps of this local landmark and watched the world go by. I certainly have. But you may want to think twice before doing so. Read more

A right Royal fuss: The Hunt for King Alfred

His Royal Highness, The Duke of Gloucester, visited the University of Winchester in June 2014 to hear about the discovery of remains in the current Alfred campaign. And, as you are about to read, with good reason…

Winchester has long associated itself with the legendary King Alfred (846-899), described as “The Greatest Englishman” by Winston Churchill. Alfred’s statue, situated at the bottom of the high street in line with the Westgate, marks the layout of the city’s streets under his design. Winchester’s historic patriotism is reflected in this iconic figure, referred to as “King of the English” by his contemporaries. Read more

The Great Hall and the Hat Fair

Posted: 27th June 2014 Rebecca Nice previews some of the Hat Fair events at the Great Hall and tells us a bit about its history.

Once the ancient capital city of Wessex, Winchester’s castle is now barely visible except for the West Gate, Great Hall and ruins accessed by a large flight of steps. Henry III built the Great Hall in 1222 as part of a much larger Motte and Bailey castle complex that’s hard to imagine, especially when standing in the area dwarfed by the county council offices and imposing law courts. Read more

Read all posts from The Winchester Guide

This website uses cookies to improve your experience while you navigate through the website. Out of these, the cookies that are categorized as necessary are stored on your browser as they are essential for the working of basic functionalities of the website. We also use third-party cookies that help us analyze and understand how you use this website. These cookies will be stored in your browser only with your consent. You also have the option to opt-out of these cookies. But opting out of some of these cookies may affect your browsing experience.
Necessary Always Enabled

Any cookies that may not be particularly necessary for the website to function and is used specifically to collect user personal data via analytics, ads, other embedded contents are termed as non-necessary cookies. It is mandatory to procure user consent prior to running these cookies on your website.